6.2 Earthquake in Yogyakarta, Indonesia This Morning 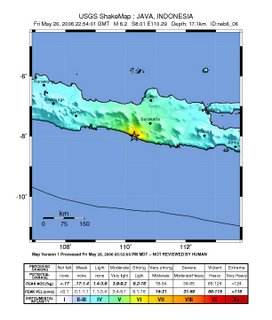 This morning May 27 at 5:54 AM local time in Java, Indonesia. Earthquake occured about 25 km SSW of YOGYAKARTA or about 440 km ESE of JAKARTA with Magnitude 6.2 according to USGS.

Casualities reported until now about 104 dead.

Yogyakarta is is known as a center of classical Javanese fine art and culture and the only province in Indonesia that is still formally governed by a precolonial Sultanate, the Sultanate of Ngayogyakarta Hadiningrat.

It is also the home to Gajah Mada University, the biggest university in South East Asia.

Plenty of people from Yogyakarta lives in Jakarta and they all wondering about their family and friends there. Bloggers respond about the earthquake.

The earthquake was reported not a volcanic one from Mount Merapi an active volcano nearby, but came from underwater tectonic shear.

My heart goes out to those who have lost loved ones and who are injured in this disaster.

Popular posts from this blog

These are reputable NGOs providing emergency aid in West Sumatra. Check their sites for how they are helping and updates of their ongoing work.

Mercy Corps
(CafeGive is donating a proportion of its sales to Mercy Corps.)

Readers in the USA can find a list of some of the organizations working to help quake victims in Indonesia, as well as tsunami victims in the Pacific Island nations of Samoa, American Samoa, and Tonga here. They are either providing direct assistance or are fund-r…
Read more

The quake struck late in the morning, at 1049 local time (0349 GMT), while many people were at work or school killing at least 70 people and injuring hundreds.

The magnitude 6.3 quake struck on Sumatra island and was felt as far away as neighboring Malaysia and Singapore, where some tall buildings were evacuated. It was followed by several strong aftershocks.

The U.S. Geological Survey said the tremor struck 20 miles below Solok. It was followed by several strong aftershocks, one measuring 6.0.

Tuesday’s quake was about 660 miles west of the country’s capital Jakarta.