May 27, 2006
Taken from Herman Saksono Blog. Herman Saksono is Yogyakarta based blogger, he wrote on his post that after the initial earthquake around 6.00 am local time, there was some aftershock quakes at 10.15 am and 11.00am and several weaker earthquakes. There was some rumors about Tsunami as well that create panic reaction in Yogyakarta area. Electricity was down for several hours and coming back around noon. The south area of Yogyakarta experienced the most damages, mostly in the form of collapsing walls. In the Kotagede (south Yogyakarta) area, Herman's uncle can't reach to the main road because his small road (gang) is fill with debris. Here are some videos he took in Yogyakarta North Ring Road of Tsunami rumors panic reaction and other situation in Yogyakarta. More on his post .
1 comment
Read more

May 27, 2006
Info from News.Jogja.com Data victims until 16.30 local time today from Satkorlak DIY [Yogyakarta's Coordinator Body ] reported 2,458 killed with location details: Yogyakarta 101 dead Kulonprogo 7 dead Gunungkidul 27 dead Sleman 55 dead Bantul 2.090 dead Klaten 175 dead Boyolali 2 dead Number of victims predicted to increase, specially in Bantul area, the nearest town to the epicenter, of the earthquake suffer the most destruction with condition describe as "flat to the ground" . City of Bantul official website: Bantul.go.id has no updates about the earthquake at the moment.
2 comments
Read more

6.2 Earthquake in Yogyakarta, Indonesia This Morning 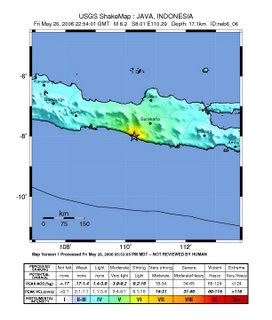 This morning May 27 at 5:54 AM local time in Java, Indonesia. Earthquake occured about 25 km SSW of YOGYAKARTA or about 440 km ESE of JAKARTA with Magnitude 6.2 according to USGS. Casualities reported until now about 104 dead. Yogyakarta is is known as a center of classical Javanese fine art and culture and the only province in Indonesia that is still formally governed by a precolonial Sultanate, the Sultanate of Ngayogyakarta Hadiningrat . It is also the home to Gajah Mada University , the biggest university in South East Asia. Plenty of people from Yogyakarta lives in Jakarta and they all wondering about their family and friends there. Bloggers respond about the earthquake . Angkringan.or.id , Yogyakarta blogger community has a short post regarding the earthquake. The earthquake was reported not a volcanic one from Mount Merapi an active volcano nearby, but came from underwater tectonic shear. My heart goes out to those who have lost loved ones and who are injured in th
1 comment
Read more
More posts